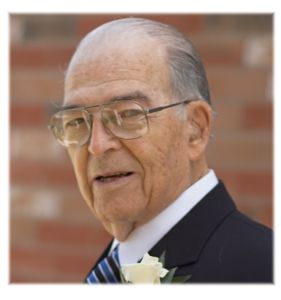 HARRIS, Joseph Howard: March 23, 1922 – June 23, 2014 – It is with great sadness we announce the passing of Howard Harris, beloved husband for 70 years of the late Florence Kettle. Howard passed away after a brief illness at Guelph General Hospital with his daughter Beth at his side. He is predeceased by his parents Joseph and Lillian (nee Holtzhauer) Harris. Sister Gloria (Norwick) and her husband John Goreski and sister Joyce and her husband Calvin Lang. Father-in-law George and mother-in-law Eveline (nee Fellows) Kettle, brothers in-law George, Howard, Charles and his wife Florence (nee Hetherington). Howard is survived by his sister-in-law Margaret and her husband Reverend Frazer Lacey, his children George (Dorothy Lou), Gordon (Elizabeth), Beth, Keith (Lorraine) and Barbara (John), his 15 grandchildren and their spouses, and his 21 and counting great-grandchildren, as well as many nieces, nephews and grand nieces and nephews. Born in Preston, Ontario Howard was a long time member of the United Church attending Silverthorn United in Toronto, Westside United in Owen Sound and for the past 37 years Trinity United in Guelph, where he was the Church Treasurer. Howard was a supporter of the CCF and NDP and a retiree of Co-Operators in Toronto, Owen Sound and Guelph. He was a supporter of many causes including the YMCA and Boy Scouts and often times in a leadership role. Howard was a man of few words, but when he spoke everybody listened. He would tell stories of being a Pilot Instructor during WWII for the Canadian Air Force, and his love for the Toronto Blue Jays and Toronto Maple Leafs. In his later years Howard and Florence were huge supporters and season ticket holders for the Guelph Storm. Howard enjoyed many evenings playing badminton as well as square dancing with Florence and together they were members of the Royal City Squares. They also enjoyed nights out Square Dancing with friends in Owen Sound and Guelph and once, a bus trip west where the club danced on the Columbia Icefield Glacier of Alberta. Howard enjoyed a friendly game of crokinole with anybody who dared take him on. Howard was a man of safety, installing seat belts in the car before they were the law, insisting his son wear a facemask while he played hockey and researching infant car seats and Motor Cycle Helmets in the Consumer Report before anyone was allowed to make their purchase. A special thank -you to Louise Young for all her kind support at Guelph Lake Commons. Thank-you to the staff of Riverside Glen for the last 6 months of care and to the 6th floor nurses and doctors at Guelph General in his final days. Please join the family for a Memorial Service at Trinity United Church, in Guelph, 400 Stevenson Street North, on Sunday July the 13th 2014 at 2pm with a lunch reception to follow. Howard was always very generous to others, so a donation to a charity of your choice in his memory would be greatly appreciated.