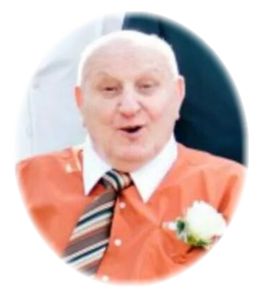 FEKETE, Mihaly (Mike) September 16, 1935 – October 15, 2014. It is with deep sadness that we announce the passing of our dad. He was married to the love of his life, Veronika Fodor (deceased 2013) for 59 years. He leaves his devoted daughters, Regina (George) Korosi, and Valerie (Csaba) Urban, grandkids Melissa Korosi-Pereira (Paul), Adam Korosi (Tiffany), Amy Urban (Gabor) and Sean Urban (Sherry), and his great granddaughter Lily Korosi-Pereira. Dear brother-in-law to Agnes and the late Janos Fodor. Also left to mourn are his sisters in Europe, Julia Kovacs and Anna Turi. Dad was a baker in Europe in the Army, and later owned his own business in Europe and Canada. He immigrated to Canada in 1972 for a better future. He enjoyed working in his own bakery, and in his garden especially tomatoes. He was proud of his grandkids and was a joker. Everybody loved him, and he made friends easily wherever he went. For the last three years, he had Alzheimer s disease and lived at Lapointe-Fisher. We would like to thank his caregivers for all of their care. Friends will be received at the WALL-CUSTANCE FUNERAL HOME & CHAPEL, 206 Norfolk St., Guelph, Sunday (1-3 p.m.). Funeral service will be held in the funeral home chapel on Monday, October 20, 2014 at 11:00 a.m. Interment Marymount Cemetery, Guelph. Reception to follow in the Wall-Custance Family Reception Centre. Memorial contributions to the Alzheimer Society, 207-205 Woodlawn Rd. W., Guelph, ON N1H 8J1 would be appreciated.